A year ago Jeff Gilfelt was giving away minSdkVersion=14 stickers, promoting the idea of dumping the support for Gingerbread and Honeycomb. What seemed radical one year ago, today is a widely accepted. The minSdkVersion in new project wizard in latest Android Studio release is by default set to 15. On the same screen you can click the “help me choose” hyperlink, which shows this screen: 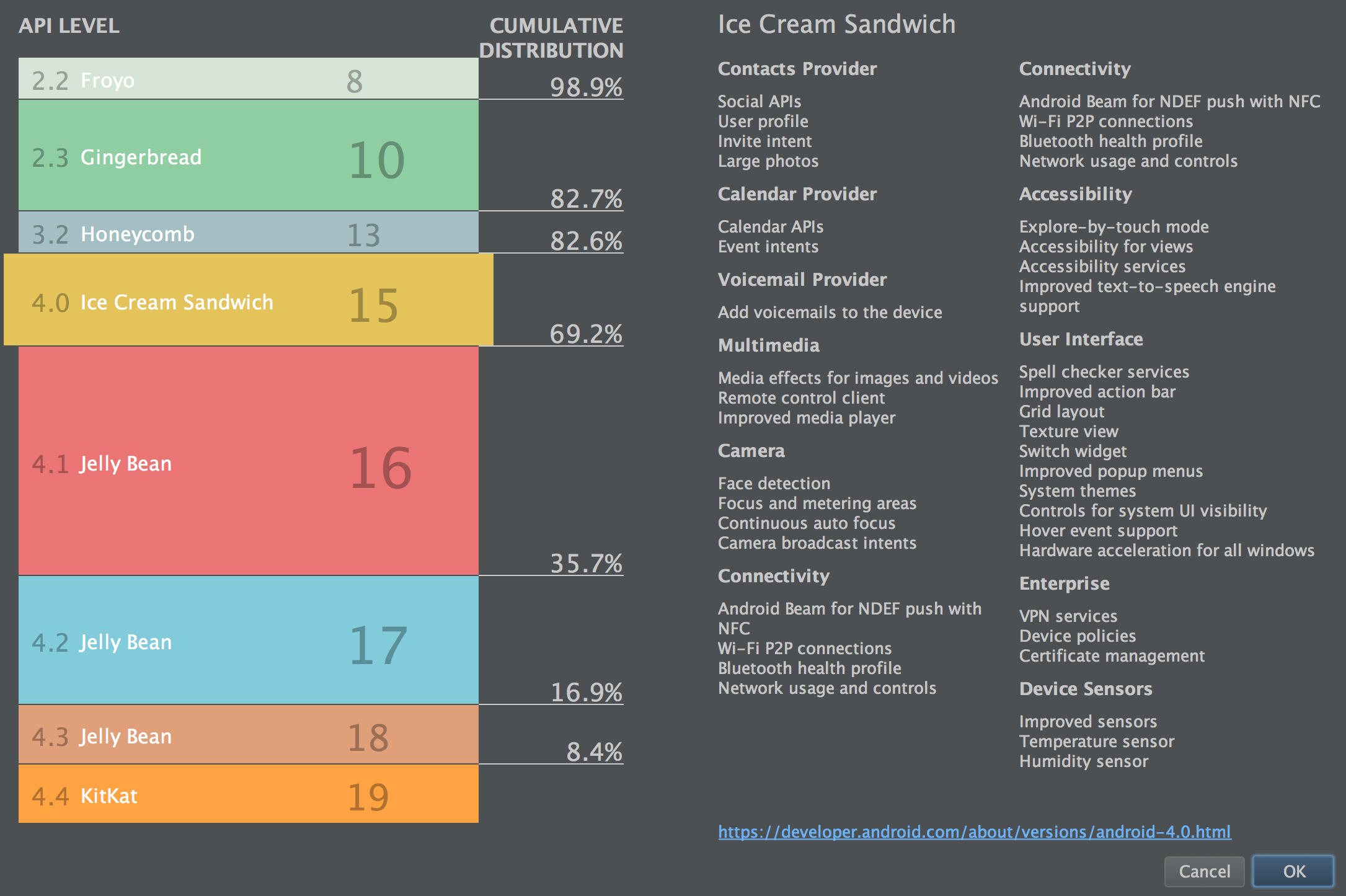 The percentages are consistent with data from developer.android.com dashboards, but I’d say they are skewed towards old Android versions. Base CRM app I’m working on has only 3.7% active users on devices with api level < 15 (compared to 17.4% from official Google dashboards). Moreover, if you look only at the new users, the Froyo, GingerBread and Honeycomb is used only by 1%. In this light, supporting pre-API15 devices is a criminal waste, and starting new projects with minSdkVersion lower than 15 a criminal idiocy.

For me, as a delevoper, the minSdkVersion=14 is a breakthrough, mostly because of Holo theme available everywhere. I no longer have to worry about HTC rounded green buttons and such when creating custom views – I only have to make them look good with a single theme. Theoretically one could have used HoloEverywhere lib, but it’s not a drop-in replacement. First you have to switch to using their Views instead of native ones and adjusting any external UI library to use them as well.

I looked through the Android changelogs wondering what could be the next version on minSdkVersion stickers. The next step is a small bump to JellyBean (API level 16), which gives us access to actions in system notifications and condensed and light Roboto font variants. Official statictics state that Ice Cream Sandwich is used by 12.3% of users, but this number is much higher than the one from Base statistics – 5.87%. I expect dropping support for ICS this year.

But then? I don’t see anything as groundbreaking as dropping Gingerbread. I don’t even see anything with more impact than dropping ICS. Theoretically API level 17 gives access to nested fragments, but I think you should be using support-v4 classes anyways (and if you check the Google I/O 2014 app sources, Google developers seem to think so too). Maybe there’s something I missed or something crucial for specific use cases – do let me know if there’s anything in API levels 17-19 you wish you could use already.

Google I/O is coming though, and some things indicate we might see Android 5.0 (or at least Android 4.5). Maybe this Android “L” version will be another breakthrough in development? My personal wish is a new runtime without ridiculous 64k method limit. Of course this opens a lot of other possibilities. Maybe support for Java 8? Or first-class support for other JVM languages? We’ll see…